Tinashe Tafirenyika holds two
National Arts Merit Award (NAMA) in Spoken Word Poetry in Zimbabwe (2017, 2018) and is the first woman and youngest person to receive one. She also has a Bulawayo Arts Award (BAA) for her poetry.

I am a “born free”, which is Zimbabwean
for post war millennial. For as long as I could remember, that name carried
nothing but contempt. According to local presstitution, the Born Free was
entitled and ignorant and Westernised. We were the face of neocolonialism and
undeserving of the liberation struggle that had begotten us. Being Born Free
also meant being born directly into the Mugabe era so for most of my life,
Bob’s tyranny was all I knew. Naturally, sweet old Uncle Bob plus the Born Free
propaganda meant I had difficulty “speaking up”. “Unpatriotic Statements” were
the kind of card tricks that made people disappear. When I became a performance
poet, this was reflected in my work and apart from fear, there was always a
strong element of Stockholm syndrome. If you hear a lie long enough it becomes
your truth. According to this lie the government was god; I was never one to
blaspheme.

Until, of course, I attended some poetry
workshop where a violent debate erupted because, as we all know, poets are all volatile
nut-cases. The question: should one write for the sake of writing or write
because they have something “important” to say?

“What is the point of you don’t address
something that your audience is too afraid to say? We are meant to be a voice
for these times. Speak truth to power!”

“The primary purpose of art is the art
itself! Is the melody pleasant? Is there a rhythm to the words? The theme is
secondary and the message optional.”

Of course the real questions were, “Is
the artist obliged to be political in politically unstable times?”, “Are they a
sell-out if they do not partake” and “Does creating art from a point of
political bias automatically compromise the quality of the art?”

As you can imagine, such “discussions”
eroded my piousness. Many of these infidels spoke as they pleased and I
inevitably began to question my devotion to this selective silence. I had
always hidden behind the second poet’s ideology, that I only made art so that
it could be sparkly and pretty. In truth, my earlier works were relatively tame
because I was afraid. And my fear was legitimate. But one day, my anger was
greater than my fear and after much consultation and hesistation I performed my
first overtly political poem. It rent the audience’s hearts just as I had sadistically
intended, for what’s a poet if they can’t make everyone as miserable as they
are? I like to think of that day as the day of my conversion, the only thing
missing was a dove floating above my afro (I had hair once, don’t ask).

I have written for the sake of writing
and also to convey some important (dangerous) message. The common ground is
that we write because we are burdened by thoughts or ideas and whether we like
it or not, our reality permeates into our work via these silent whispers into
our conciousness.

Because our reality changes constantly,
we will write different things at different times. And each time, only the
works we believe in the most will stand out, regardless of whether we believe
in them for their truth or aesthetic (although the aesthetic part is kind of
non negotiable, no one wants to read trash no matter how “powerful” the
message). There are days when being silent WILL make you a sell-out. There are
also days when rabble rousing isn’t worth the trouble it will bring. As with most
complicated questions in life; there is no straight answer. All one can do is
write what they feel and hope the readers or audience feel it too. 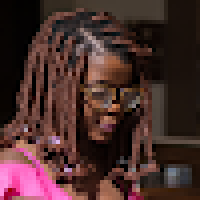 Tinashe Tafirenyika Author
Sorry! The Author has not filled his profile.
email
tafirenyikate@gmail.com

Tinashe Tafirenyika
View More Posts
Tinashe Tafirenyika, in 2017, became the first woman and youngest person to receive a National Arts Merit Award (NAMA) in Spoken Word Poetry in Zimbabwe. The same year she also received a Bulawayo Arts Award (BAA) for her poetry. In 2018 she became the only person to have won a NAMA twice in the Spoken Word Poetry category. Tinashe lives in Bulawayo, Zimbabwe.

Nigeria’s Culture of Anthologies: Making a Case for the New Generation – #PaulLiam