But this process feels like a gift from a frugal giver; it happens infrequently and cannot be anticipated. If I relied on these painless sittings, I wouldn’t have many poems at all. So I’ve had to expand my practice—

Sara Elkamel: For me, writing a poem is at times absolute agony and other times, as natural and straightforward as letting out an unrestrained shriek when something is extremely scary or hilarious. Honestly, it is most pleasurable for me when it’s easy—when I sit at my desk and, after staring into space for a number of minutes, pen touches paper and the words come, like they’ve been waiting hungrily for release. These episodes feel like ones of transcription, or translation; I listen, I record. But this process feels like a gift from a frugal giver; it happens infrequently and cannot be anticipated. If I relied on these painless sittings, I wouldn’t have many poems at all. So I’ve had to expand my practice—this is where the agony comes in. I usually keep a notebook—most recently a black, unlined Moleskine—which I use to record thoughts or snippets of dreams and conversations, and which I keep within reach when I sit down to read poetry or fiction (or other forms of texts). I’ve also developed a habit of watching films with my notebook in hand; ready to take down lines of speech or striking images. After about a week of note taking, I’ll arrive at the desk and use what I have as a foundation for a new draft. I try to believe that there’s some invisible logic to these notes, and in a way, looking at them feels like solving a puzzle, or reading a map. It gets tricky when I fail to spot the logic—when nothing clicks. When the map is to nowhere.

The notes I take are not always random; sometimes I will consciously decide to consume materials about a topic I’m interested to approach poetically. For instance, since I’m intrigued and enchanted by the desert, I’ve been trying to watch as many “desert films” as I can, including “Date Wine” by Radwan Al-Kashef, “The Wind Will Carry Us” by Abbas Kiarostami, “The Nightingale’s Prayer” by Henry Barakat, “The Tomb” by Eltayeb Mahdi, and “The Night of Counting the Years” by Shadi Abdel Salam. The notes I took from watching these films then made their way into my poetry, and in a couple of instances, completely informed the poems. I have also been reading more academic texts on topics I’m eager to engage with, such as: funeral rituals in Islam, conceptions of the afterlife in Ancient Egypt, and the history of the sugar industry. The language and ideas in these texts have also been very useful as I begin or develop a poem.

Also integral to my process are the people I meet and find myself moved by. I don’t know if I would be able to write if I could not love. But maybe that’s a story for another time.

Sara Elkamel: I am a door in a desert with no doors.

Sara Elkamel: I don’t know about literarily saving a person’s life; I think as part of my practice, I find myself trying to memoralize some people whose lives were unjustly lost—such as in the 2011 revolution in Egypt. For example, my poem “Buried at Sea” in The Adroit Journal commemorates the life and death of Jika, a 16-year-old Egyptian who was fatally shot during protests in November 2012. The speaker and their beloved are mourning Jika throughout the poem, and inventing rituals to honor his life.

Sara Elkamel: To borrow the words of a poet I deeply admire, Yusef Komunyakaa, to me Africa is a “wounded paradise” (from his poem, “Tenebrae”). I ache for a reparative future.

Sara Elkamel: In my eyes, no other poet is as dexterous as Carl Phillips when it comes to asking questions in a poem. He often uses them to reveal the speaker’s uncertainty and gesture toward the meaning-making process that accompanies it. His questions sometimes work to destabilize his poems, ushering in doubt and restlessness, and at times they offer moments of lucid vulnerability.

Phillips’s poem, “As from a Quiver of Arrows”, is composed entirely of questions. The speaker loads his figurative bow and shoots question after question—at us, and surely, at himself. In the first four stanzas, the speaker is questioning how to respond to a very recent death. “What do we do with the body” is such a brilliant opening line. It tells us that the speaker is dealing at once with practical concerns around funerary rituals, as well as considering the responsibility of the living towards the memory of the dead.

One of my favorite moments in the poem is this: “Will it be / salt or late light that it melts like?” This gorgeous, deceptively musical question tells us that the speaker is resigned to the erasure of memory—but is he? The two similes he invokes (“like salt or like late light”) have very different implications. Salt has an incredibly high melting point: 801 °C, and therefore would require both the deliberate application of heat to melt, while late light fades like a bruise fades—just at the moment you stop paying attention.

The poem also has an incredibly elegant structure. As often is the case with Phillips’s poems, a hinge appears exactly halfway through the poem that confirms what we suspected all along—that the speaker has a personal stake in this death; a relationship with the departed. “Here, on the floor behind his bed is /a bent photo—why?” is such a brilliant line because it draws attention to the corporeality of the speaker—he is on his knees, finding a photograph behind the departed’s bed!

I have been moved for years by the unanswerable questions that appear in the second half of the poem, including: “Is it okay to be human?”, ”What if it is rest and nothing else that we want?”, and that stunning last line “What will I do now, with my hands?”

There is perhaps a risk, with dispensing so many unanswerable questions at once, that readers walk away confused, or feeling as though they had been drawn into the dark and abandoned there, shot with questions they can’t quite answer—for the speaker or for themselves. It is a risk, however that the poet is willing to take. “A risk-taking sensibility—if it is a risk to plumb questions that most people avoid trying to answer—has had everything to do with what I write about and how I write about it,” Phillips writes in his 2014 Kenyon Review essay “Foliage”.

Sara Elkamel is a poet and journalist living between her hometown, Cairo, and New York City. She holds an MA in arts journalism from Columbia University and is currently an MFA candidate in poetry at New York University. Named a 2020 Gregory Djanikian Scholar by The Adroit Journal, Elkamel has had poems appear in The Common, Michigan Quarterly Review, The Rumpus, Nimrod International Journal, Four Way Review, The Boiler, Winter Tangerine, and as part of the anthologies Halal If You Hear Me and 20.35 Africa, among other publications. 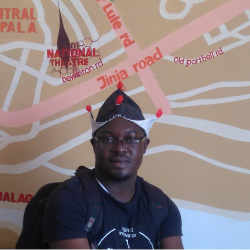 Richard Ali
Richard Ali is a Nigerian writer whose poems were first published in 2008. He has served in the National EXCO of the Association of Nigerian Authors and sits on the board of Uganda’s Babishai Niwe Poetry Foundation. A member of the Jalada Writers Cooperative based in Nairobi, his work has been published in African Writing, Jalada, Saraba Magazine and elsewhere. The Anguish and Vigilance of Things is his debut collection, was published in 2020. He practices Law in Abuja, Nigeria.

Richard Ali
View More Posts
Richard Ali is a Nigerian writer whose poems were first published in 2008. He has served in the National EXCO of the Association of Nigerian Authors and sits on the board of Uganda’s Babishai Niwe Poetry Foundation. A member of the Jalada Writers Cooperative based in Nairobi, his work has been published in African Writing, Jalada, Saraba Magazine and elsewhere. The Anguish and Vigilance of Things is his debut collection, was published in 2020. He practices Law in Abuja, Nigeria.

Konya Shamsrumi is an African poetry press, perhaps the only one. It sure feels lonely. So, come join in—Dakar to Cape Town, Nakuru to Casablanca—#OneAfrica

Join our list and keep up to date with our continent's best poetry news, views and interviews.