Africa is the seed from which the world sprouts. Africa is nourisher of the earth.

Munukayumbwa “Mimi” Mwiya: I am a really lazy writer. Well, I am generally a really lazy everything. So that makes writing both incredibly easy and incredibly difficult. When I write because I am asked or expected to, it doesn’t come very easy. I must really concentrate and dig deep. Which often has me spring cleaning, cooking, reading… anything but writing! Yes, I live up to the stereotypes, I am not proud of it.

But there are some poems that pretty much write themselves, they just come to me and it is as easy as me putting pen to paper. These happen in the middle of conversation, or because I saw a bird fly, or thought about the smile of a boy, or because it’s raining outside.

Munukayumbwa “Mimi” Mwiya: I am a travelling mess running on love and wine.

I have a piece called The Past which simply talks about how we often want to go back to the past because it’s easy to forget that we struggled there too, only that we survived.

My good friend, Minnie, loves it and I don’t think it has saved her life as much as she’s told me it has. She says the first time she read it, she couldn’t quite tell why but it became her go-to for whatever she was going through in life… she would always go back to it. She eventually realized it helped her deal with a traumatic experience and not only encouraged her to speak up about said traumatic experience, but that the past she was tempted to go back to, was a past of silence, a past where she didn’t have the courage to speak up. By proxy, Minnie is perhaps all the ambition in my life. One of the funniest, most beautiful people I know. When I think of Maya Angelou’s words, ‘I love to see a young girl go out and grab the world by the lapels. Life’s a bitch. You’ve got to go out and kick ass’, Minnie comes to mind. That girl definitely knows to grab life by the lapels!

Munukayumbwa “Mimi” Mwiya: Africa means the world to me! Truly the cradle of life. I am fascinated by how we are so diverse as a continent, but could easily be from the same village. I am not too crazy about our potential, which is limitless, because I am not too crazy about the concept of potential in general. Potential undeveloped and/or unworked on is just that, potential, and it’s not much use to anyone. Unfortunately, I feel a lot of Africa’s potential is just that. Which, thankfully, does not take away from its beauty in reality.

Munukayumbwa “Mimi” Mwiya: I absolutely love T. S. Eliot’s The Hollow Men! I think it perfectly captures how life is simultaneously too long and too short (something I firmly believe) and it’s hard for me to pick favourite lines from it, but I will try:

Munukayumbwa “Mimi” Mwiya is a floater who sometimes sits still enough to write. She was born in November 1989 in Windhoek, Namibia. Mimi has been published in the German magazine, D+C where she speaks about literature in Namibia in an article titled, “Finding A Nation’s Voice”. She has been a contributor to the Afridiaspora maiden anthology, “My Africa, My City,” and occasionally writes for The Kalahari Review. Some of her poetry has been published by Praxis Magazine (www.praxismagonline.com) , Unam Press Namibia and Ghana Writes Literary Group. The people she loves aside, Mimi’s biggest love and vice is red wine. 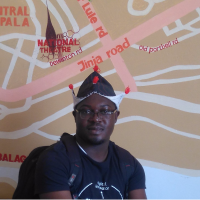 Richard Ali is a Nigerian writer whose poems were first published in 2008. He has served in the National EXCO of the Association of Nigerian Authors and sits on the board of Uganda’s Babishai Niwe Poetry Foundation. A member of the Jalada Writers Cooperative based in Nairobi, his work has been published in African Writing, Jalada, Saraba Magazine and elsewhere. The Anguish and Vigilance of Things is his debut collection, was published in 2020. He practices Law in Abuja, Nigeria.

Richard Ali
View More Posts
Richard Ali is a Nigerian writer whose poems were first published in 2008. He has served in the National EXCO of the Association of Nigerian Authors and sits on the board of Uganda’s Babishai Niwe Poetry Foundation. A member of the Jalada Writers Cooperative based in Nairobi, his work has been published in African Writing, Jalada, Saraba Magazine and elsewhere. The Anguish and Vigilance of Things is his debut collection, was published in 2020. He practices Law in Abuja, Nigeria.

Konya Shamsrumi is an African poetry press, perhaps the only one. It sure feels lonely. So, come join in—Dakar to Cape Town, Nakuru to Casablanca—#OneAfrica

Join our list and keep up to date with our continent's best poetry news, views and interviews.